How to be an MVP in basketball 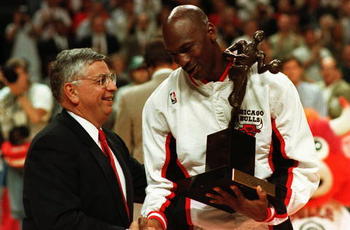 How to be an MVP in basketball?

Lao Tzu once said, “A leader is best when people barely know he exists, when his work is done, his aim fulfilled, they will say: we did it ourselves.” A great leader would always work on ways to inspire members to do great jobs. And it doesn’t have to be pretty obvious. Just like LeBron James in basketball, although people definitely know LeBron exists, they don’t often recognize his leads in ways that are both obvious and subtle.

In a sport that boasts some of the world’s best and best-paid players, just like basketball, how does a player distinguish himself as an MVP? Simple. Remember these ethics.

1.       Have a consistent work ethic.  Leave the superstar attitude and sports-apparel contracts at home and focus on one thing: becoming a better player and better team. As Coach Wooden once said, “Many athletes have tremendous God-given gifts, but they don’t focus on the development of those gifts. Who are these individuals? You’ve never heard of them — and you never will. It’s true in sports and it’s true everywhere in life. Hard work is the difference. Very hard work.”

Be a professional. Always be on time. Follow the schedule and order of your coach. These are just some of the simple work ethics that must be observed.

2.       Develop versatility. Shooters shoot. They score points. The TV camera replays their basket. The crowd cheers and it feels damn good. But scoring alone doesn’t win championships. You have to be a shooter, a guard, a rebounder and everything else in the court. You have to know how to be one of these. Of course, we always know that you have your special talent, but it is always important that you know how to do a little of everything.

3.       Play to your strengths. Although I just praised versatility, it’s also important that you recognize your weaknesses. You don’t have to excel in every aspect of the game but you do have to do what you do best — often and successfully.

4.       Keep the team involved. Points scored are of tremendous value to a team, but when a player scores a lot of points without involving his teammates, he is making it more difficult for his team to win. For example LeBron scores points in bunches, but he does it without forcing the issue. When other players have the opportunity to score, LeBron will give the ball up, especially when the other player has a hot hand. He is a leader who enables his teammates to be their best. This builds team cohesion and team confidence — which lead to team championships.