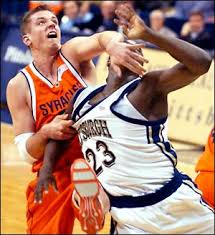 Basketball is a team sport played mostly in an indoor court. Just like any other sport, basketball has basic rules and regulations to abide. The game must be played by two teams with five members and five substitutes on the sideline sitting. To gain a point for winning, players must be able to shoot the ball into an elevated basket 10 feet from the ground. The ball used for this game weighs approximately 600-650 grams and a circumference of 75-78 cm.

How the Game is Being Played

To start the game off, two players must stand at the center circle of the court and as the referee tosses the ball up, they should jump for it and tap it to their team mates.

The players must run to the court and bring the ball while bouncing and passing it to each other.

The very goal of the game is to gain points by shooting the ball onto the basket. Every shoot is equivalent to two points and whenever the successful throw is from the three point line of the court, then the player gains three points for that.

There are actions that are never allowed on the game. Referee has the control to decide whether the action is a foul or not.

Once a player runs over another player on the defensive side, it’s called an offensive charging foul. The ball then is given to the team that was fouled upon by the other team.

Physical contact is considered a foul once done without the reason of stealing the ball. It is called an intentional foul.

Both players and the coach can commit a foul by showing or acting disrespectful manners while the game is on. Gestures, languages and arguing the committee is indeed considered a technical foul.

A foul done with a strong contact with the defender without establishing a position to stop the opponent player from scoring is considered blocking.

Violence inside the court is strictly prohibited. Kicking, punching or hitting each other during the game is considered as Flagrant Foul. This foul can give the player a free throw reward and retaining the ball after.

–          Happens when a player dribbles the ball using his or her both hands at the same time.

–          A travelling violation happens when a player takes more than one step and a half without dribbling the ball.

–          Happens when the offense team brings the ball across the mid-court line and goes back across the line.

–          Five seconds is given to a player in order to carry, not longer than the time given, he/she should be able to pass the ball to his/her teammates.

–          Whenever the ball is near the basket, anyone of the offensive must not touch the ball as it can result to goaltending violation. The point then is counted and the opposing team is given a throw-in as a reward.

–            A player carrying the ball must not stay on the key for more than 3 seconds or else it will be called as a violation by the referee.

Center Players are mostly the tallest players of the team. They are generally positioned near the basket in order to keep the opponents from gaining points.

Forward Players are the second tallest players on the team. They are generally positioned under the hoop, corner areas and wings.

Guard Players are mostly the shortest among the players. They must possess a good dribbling and passing skill.

Learning the most basic fundamentals of the game basketball must be a priority by players and even the coaches themselves. In order to be good at this sport, this would be the very main thing any basketball enthusiasts must be good at to understand the game.