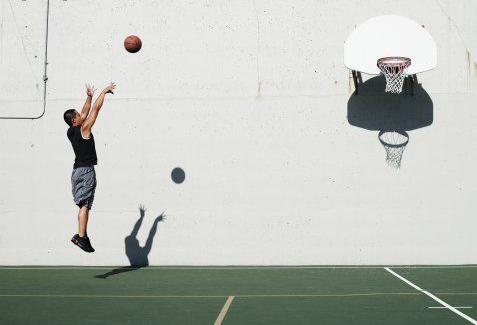 The game of basketball has always been tough on players who set out to improve their skills.  This is primarily because developing one’s skill for the game is necessary in order to excel and win games.  In order to improve your game, you need to practice a lot, have the drive to improve, and of course, play against better players.  Overall, you will not improve as much if you do not have all three.  When practicing, it is often suggested that you follow a regimen so that you do not practice without any real direction.  The truth is there are many simple basketball drills that you can practice to help improve your game.  The list below shows a few of them. 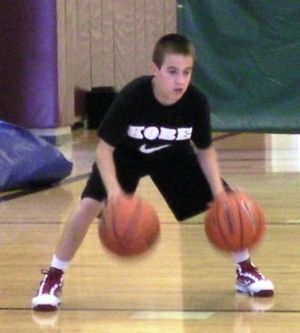 Ball Handling Drill – the two-ball dribble drill is a drill that can greatly improve your ball handling skills.  To practice this, you will need two basketballs – one ball per hand.  Start dribbling the balls from the baseline heading towards the free throw area.  Make sure both balls are hitting the floor at the same time or simultaneously.  Upon reaching the free throw area, do a stagger dribble with which each ball hits the floor alternately.  Perform this type of dribble until you reach the half court area.  Once you reach the half court mark, do the simultaneous dribble again until you reach the free throw line and do a staggered dribble until you reach the opposite baseline.  Do this over again until you reach your starting point.  Once you’re comfortable doing the alternating rhythm two-ball dribble drill, try doing the up and back drill where you still do the same drill, except, after taking 5 steps forward, you then do 2 to 3 steps backward; and doing this until you reach your starting point.

Passing Drill – one of the most important passes, particularly for offensive situations, is the overhead pass.  When you need to pass to someone from across the floor, the two-handed overhead pass is often the choice.  To practice your overhead pass, have a friend or teammate stand at least 20 to 25 feet away from you.  Place the ball slightly behind your head while holding it with both hands.  When you are ready to pass, step forward with one foot to give your throw extra momentum, then extend your arms forward to make the pass.  By practicing making these throws at long distances, you will gain confidence in making accurate long range passes during game situations.  In fact, if you practice this with a teammate, your teammate will also be able to practice these long range passes.  Once you’re confident with the accuracy of your long range passes, try making passes on a moving target.

Shooting Drill – this certain shooting drill will help to increase your shooting range.  Improving the range of your shot is vital to becoming an effective offensive player as it allows you to make field goals from different positions on the court.  To practice, warm up your shooting first at close range then work your way further to the distance you are still comfortable shooting from.  On that range, do 10 jump shots.  If you can successfully make 8 out of 10, then move back a feet or two further from the spot you normally shoot from.  When shooting from this range, be sure that you are still following the same shooting from you previously used.  Instead of using more arm power, try getting the extra strength needed to propel the ball further from your lower body.  Make sure to focus on using usual shooting from.  Now, try to make 10 jump shots from this distance.  Again, if you can successfully make 8 out of 10 in several consecutive tries, you can move back another foot or two.  Continue doing the drill until you are unable to make the ball reach the hoop while maintaining your shooting form.  The goal here is to extend your shooting range as well as determine your shooting range.

Rebounding Drill – being a rebounder, particularly during offensive situation, you must focus on going up strong for a follow up as soon as you get the rebound.  To practice this, start by standing 4 to 5 feet away from the hoop on the right side.  Toss the ball towards the backboard and attempt going for a strong rebound.  Make sure to keep the ball protected near your chest then go back straight up for the shot.  Do this at least 10 times from both sides of the basket.  Once you’re done with this drill, do it over but this time adding a pump fake before jumping back up for the shot.  Usually, inside players will attempt to block your shot after your rebound so a quick pump fake will distract them and move them out of their optimum blocking position.  Practicing the pump fake will make it instinctive during real games.

Defensive Drill – slides are helpful in building up defensive skills as it helps to increase your quickness.  If you work on your defensive slides, you will without doubt become a better defender.  To practice this, position yourself under the basket and dash out to the free throw line.  As soon as you’re near the free throw line, decrease your speed and chop your steps to give you better control and be ready to slide (a move call ‘closing out’ particularly on opponents on the offense).  When you close out the free throw line, slide quickly to the corner of your court.  Do this drill several times while alternating corners.  Another type of slide is to position yourself on one side of the paint, lowering yourself using your knees so you can nearly or easily touch the floor.  You then try to move sideways towards the other side of the paint (as if defending ) and touching the paint with your outer hand.  Upon touching the floor you immediately slide towards you original position to touch the floor with your other hand and then sliding again to do the same thing over.  Performing this drill will help you to develop dexterity so you will be able to follow your opponent regardless how fast he is.