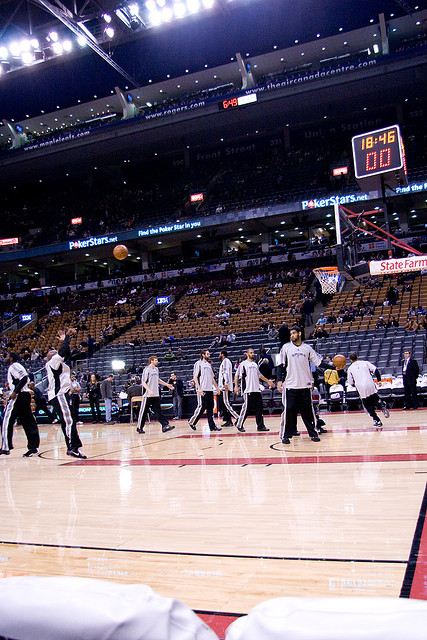 In order to prepare for a game of basketball, it is necessary that players, regardless of age or ability, to properly ready themselves for the game.  This can be done by performing basketball warm up drills before the game.  This is in fact a necessary activity as it helps the players to loosen up and allow them to play better during the game because these drills involve skills that a player will likely use in the game.

The truth is basketball warm up doesn’t just involve practicing certain shots and skills, it also involves warming the body up and preparing it for an extensive physical activity that will likely last an hour.  If the body is not warm (or warmed up), it is potentially more prone to injuries.  Players can tear muscles easily if they are not properly warmed up.

The explanation to this is actually quite simple.  If you sit down on the bench with hardly any movement for a prolonged period, your muscle becomes stiff and cold.  In order to attain their usual flexibility and range of movement, you need to warm them up with stretching and warm up drills.  You cannot expect your muscles, joints, and ligaments to be in top form in an instant.  You need to at least warm them up, the same way, in a sense, how you need to warm up a performance engine.

If your basketball team has a coach, the basketball warm up drills you will be performing are likely designed by your coach.  These drills won’t just keep you occupied until the start of the game, but they will also help in warming up your muscles.  The truth is more experienced coaches will require his players to do some stretching before heading out on court.

Most coaches will require their players to arrive at least an hour before tip-off.  This will give them enough time for light practice like shooting some jumpers.  For players returning from an injury, they may be required to do light jogs and dribbles only.  It will be upon the coach’s discretion if a returning injured player is ready to play or not.

Once the practice shooting ends, all players must return to their respective locker room.  This would be the time coaches will address their players and give them some pep-talk.  Around 25 minutes before the tip-off, players will need to perform their individual stretching to loosen up any hardened muscles and better prepare themselves for the game ahead.  After the players have fully stretched, nearly 15 to 20 minutes before the tip-off, players will now head out on court to do some basketball warm up drills.

Layups:  have your players form two lines on the left and right side of the key.  The player on the right side will then dribble towards the hoop and make a layup and then head at the back of the left line.  The player on the left then will run and towards the hoop to grab or rebound the ball and then pass it to the next player on the right and then head at the back of the right line.  Once the all the players have had their turn making layups with their right, the order will then be changed and the players on the left side will be the ones to dribble and make a layup using their left hand.  This process will continue until all players have managed to do both the right and left-handed layups.

Shooting Lanes:  maintain the two lines you formed during the layup drill.  This time, instead of dribbling towards the hoop for a layup, have the ball handler shoot from any spot they want.  As soon as the shot is made, the player from the other lane will grab rebound, pass it to the next player to shoot, and head at the back of the other lane – similar in order as the layup drill.  This will drill continue until all players have shot from the right and left side of the court.

One-on-One Light Dribble:  have your team pair up and have the first pair to line up on the baseline.  One player will dribble towards the mid-court while the player casually defends.  Upon reaching the mid-court, they swap positions and the player will now dribble back towards the baseline.  Once they finish their turn, another pair will do this drill.

Light Shoot Around:  to start this drill, you need to designate two groups.  Each player will have a designated half on the other group.  As one group shoots, the other group rebounds and passes the ball to their designated opposite.  After about 3 to 5 minutes, the two groups will swap roles.

Half-court Three Man Weave:  the drill will have three players facing the basket at half court.  The ball will start with the person in the middle, player #1, and will then be passed towards player #2.  As soon as he passes to player #2, he will then run behind that player who at the same time will pass towards player #3.  Player #2 will now cut at the back of player #3 while player #3 passes the ball to player #1.  The passing will repeat until a player is near enough to make the layup.  After the layup, passing shall resume going back to mid-court and then headed back towards the hoop.

With the drills mentioned above, in just a few minutes, you will have your players loosened and warmed up for the game.  In addition, as the players were warming up and following the drills, they were hitting some of the basic fundamentals of the game.  Whether you are a coach or the leader of the team, it is essential that you get your team ready for the game using basketball warm up drills.  Drills are made to mimic certain facets of the game so that not only does it warms you up, but it enables you to practice as well.  During practices, you may want to rehearse your pre-game warm up routines with your team so that they know what they need to do and how to do it during real game time warm ups.