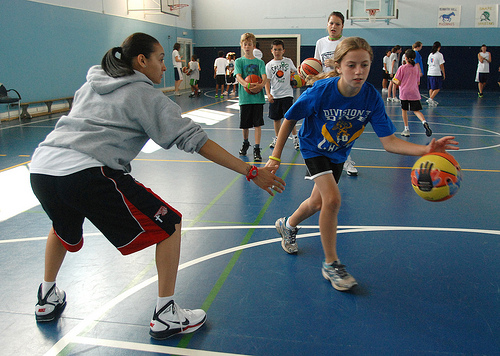 The game of basketball requires both effective and committed coaches to impart their knowledge, strategy, and training to elevate their team’s competitiveness.  A coach must therefore possess the skill and keen eye so he can assist in developing the skills of not just the team, but also of every individual player.  He also needs to be able to lead and motivate the team so the players can act as a team and not individually.  The list below shows some effective basketball coaching ideas. 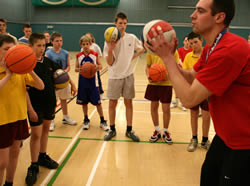 When coaching, particularly when you are new to it, it is very important that you build your coaching philosophy on knowing what your goal and priorities are, such as what to do first or what drills or strategies to practice that may fit the team.  In order to gain an insight on positive coaching philosophy, you may want to read books, attend clinics or classes provided by highly successful coaches.  This will enable you to learn how to focus not just on creating a winning team, but also on how to impart lessons and values to your team.

Coaches should always try to build a good rapport between team members and one of the most effective ways of building this would be through team building.  If a team has a good relationship with each other, they would be able to encourage and build expectations as well as accountability.  One team-building exercise that is very effective is the “Birthday Balance Beam.”  This exercise requires a mat for each group of 10 and a low-standing beam.  To start the exercise, get your team to lineup themselves in any order on the beam.  After that, they should try to rearrange their position in order of birth.  If any member of the team so much touches the ground or complains about a teammate, then the whole exercise should be restarted until it is completed without any mistake.

There are actually many ways to prepare your team’s mental preparedness for a game.  Centering is one example of a mental technique and this can done before practices and before games.  To start the mental preparedness technique, have your team stand with feet at shoulder width apart, guide them to inhale and exhale deeply, and make them focus on their tension which gets relieved slowly each time they exhale.  Another technique would be developing the ability to block external noises.  This can be done by playing loud, irritating, and distracting noises while they practice doing shots and free throws.

In order to build your team’s ability to work well with each other, build important basketball skills such as shooting, passing, catching, dribbling, rebounding, agility, stamina, and muscle strength, you need to perform drills and games.  One simple drill is the two-ball split-vision passing drill.  To perform the drill, have four to six of you player form a line.  Then have a player stand about 8 feet away in the middle of the line of players.  Give a ball to one player on the line and one ball to the player standing 8 feet away.  Have the player with the ball on the line pass the ball to the lone player while the lone player tries to rapidly pass the ball among the players lined up.  The objective here is to improve catching and passing ability, particularly that of the lone player.

Several decades ago, there were limited opportunities available for girls in sports.  However, in 1972, there was an amendment in the Civil Rights Act that allowed the inclusion of all-girl teams in any sport.  This helped increase the number of female participants in athletic teams.  Such increase meant that there needs to be proper coaching needs and methods for male and female athletes.

It is important to remember that although the genders are different, the sport they are involved in remains the same.  However, since the movements of girls are often more calculated, they are encouraged to play aggressively while adhering to the rules of the game – a strategy that is useful when coaching both males and females.

The biological development of boys and girls are significantly different.  A good example would be in height.  Girls are usually taller during their early stages and reaching the end of their growth spurt at an early stage as well.  Boys on the other hand tend to grow over a long period with an intense growth spurt during their early teens.  This is because as boys near these stages, their testosterone levels become significantly greater which leads to development of both growth and physical strength.  The significant differences between development rates of girls and boys means there is also a difference with coaching strategies.

According to reports published in the Physical Educator in 2000, female athletes are motivated to excel in sports under different reasons as compared to male athletes.  According to them, females find the participating in sports along with other basic rewards of the sport as motivational, whereas men find winning and awards to be the motivational factor.  This means girls are likely to respond differently to coaches who are entirely consumed with winning competitions.  According to another review published by the Montana State University, boys/men usually rate the knowledge and skill of their coach as more important as compared to how females rate their coaches.

Females are the one who usually states that their success is attributed to their obstacles along with their continuing participation in the sport.  For a coach, becoming aware of these obstacles will allow them to respond better to the needs of their players.  The obstacles the females usually encounter are the gender stereotypes with favoritism shown towards their male counterparts on coed teams, poor access to quality training equipment, poor coaching quality for female-only teams, and hardly any high-level opportunities in the sport which includes scholarships.

Although there are a few differences between coaching males and females, since the game is still the same, there are inevitably more similarities as compared to differences.  This would include their appreciation towards coaching personality, caring and communication skills.